I was thrilled to hear the latest news from Airbus, the European aerospace and aviation corporation: their BelugaXL took its first flight on July 19, 2018.

I remember seeing BelugaST #3 with my dear friend, François during an Airbus tour at the final assembly site in southwest France, near the Toulouse-Blagnac airport.

Our wonderful tour guide, Vanessa, told us the aircraft was named after the Beluga whale, the marine mammal it strongly resembles due to its large, bulbous head. The cargo is loaded through a hinged-door at the nose of the aircraft.

Outside the Aeroscopia Aeronautical Museum

When I was booking my return flight from Paris, I have to admit I was mainly looking at the schedules. It was only later on that I noticed that my flight would be on an Airbus A380 – a wide-body, double-deck, four-engine aircraft – currently the largest commercial airplane in the world! 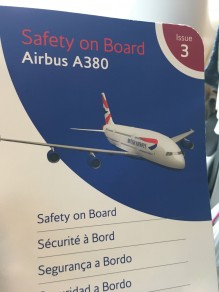 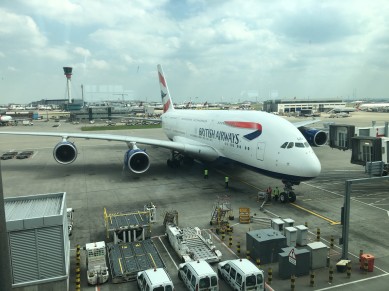 The plane was so huge that they needed two jetways to board passengers. It was the smoothest, quietest, and most comfortable flight that I’ve ever been on. I’m spoiled now; the next time I take a long-haul flight, I would definitely choose to fly on an A380, if possible. Fortunately, there’s an app for that: iFlyA380 lets you look up flights that specifically use an Airbus A380.

Many years ago, I visited the Museum of Flight in the Seattle, Washington area and I recall seeing a variety of aircraft, like the impressive Air Force One. I also remember the excitement of sitting in the cockpit of a fighter jet, if only for a few seconds! But I must say, my recent experiences of flying on an A380, taking an Airbus tour, and seeing a BelugaST have significantly piqued my interest in aviation.

Félicitations, Airbus, on the new BelugaXL!

Do you have a favorite aircraft?Have you flown on an Airbus A380? Tell me in the comments below!