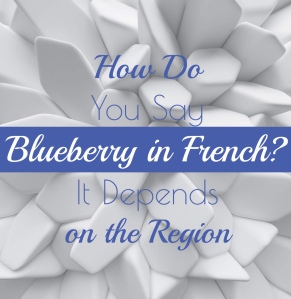 How languages, dialects, and accents develop over time is fascinating to me. It’s proof that a language is living because it constantly moves around and grows.

In school, I studied the mechanics of French. But as with any language, the best way to learn how to speak and develop fluency in français is to immerse yourself by listening to and speaking with native speakers.

Another way is to read engrossing books about regional language differences, such as this book that my friend who lives in Toulouse gave me:

The Atlas du français de nos régions, by Armand Colin is so fun to read! It’s informative and includes colorful illustrations. There are hundreds of expressions in the book. Here are a few of my favorites.

In France, they call blueberries myrtilles. But when I was in France recently, I was met with blank stares when I’d ask for bleuets. I had incorrectly assumed that was the French word for blueberries because that’s the French translation I’d see on packages in the United States. It hadn’t occurred to me that the translation could be a regional difference. It turns out that bleuet is the Québécois word used to call blueberries in Québec and other parts of Canada. Now I know!

Another regional difference is the German influence on French. It’s logical that some French words spoken in Switzerland or Luxembourg would have German-sounding words (schnougel; schpritzer – meaning shingle; shredder) given those countries’ shared borders with Germany.

In the southern region of France, near Spain’s border, it’s rational that many words start with «es » prefix, making them sound Spanish/español (être esquiché; escaner – meaning to be fooled; to scan). So intriguing!

It was cool to learn that what we call the trunk of a car in the U.S. is called a malle in Toulouse! It was fun to learn that, also in the Toulouse area, people will say the final -s (as in, moinS, encenS) or the final -l (as in, persiL), when elsewhere those letters would be silent.

The regional differences in saying the numbers 70, 80, and 90 are also captivating. For instance, many of us likely learned soixante-dix (60 + 10) for 70, but saying trois-vingt-dix (3 x 20 + 10) as they do in some parts in southeast France is too much math to do in my head! To keep things even more interesting, in Belgium, they prefer the term septante for 70.

There are countless other regional differences described in the book and these examples are just a few that intrigued me.

What are some interesting regional expressions you’ve heard (in French or another language)? Let me know in the comments below.

I'd love to hear from you: Cancel reply