In my post about visiting Notre Dame Cathedral in Paris, I mentioned being a confirmed, but non-practicing Catholic.

Save for the truly devout, who could blame me?

After all, I cannot bring myself to go to church when I do not agree with the Catholic Church’s hate, abuse of children by clergy, hypocrisy, and its views on ordination of women, abortion, homosexuality, and more.

By the Church’s standards, even thinking this way means I have failed. It is seen as refusing the internal Catholic practice of religious submission of intellect and will to its moral teachings.

In addition, I stopped the external Catholic practice of attending Mass and Holy Days of Obligation.

But don’t get me wrong…

I believe in a higher power.

I believe there is a creator.

I believe we’re not alone in this world.

I believe in choosing kindness, serving in the community, and practicing gratitude.

I simply decided I didn’t need to go to church to believe these things. I had become a conflicted Catholic.

When I was younger, however, it was a different story. Growing up, my family and I would go to church every Sunday at 11 in the morning. And if we woke up late and missed that Mass, my mom would make my brother and me go to the noon Mass – in Spanish! It didn’t matter that we didn’t understand; we just had to be present. Then in high school, while my classmates went to sports practice or part-time jobs, I went to choir practice after school. In college, I even considered attending a summer retreat at a convent in Idaho.

For many years, I thought I had the calling. But as they say, life happens! My interests changed in favor of more secular pursuits.

Maybe this duality is what draws me to Lauren Daigle and her music. Her genre of music is Contemporary Christian, but many of her songs don’t sound overly religious or preachy. Some of her songs have a bit of a jazz or reggae vibe, too.

With a powerful voice that has been described as a cross between Adele and Amy Winehouse, her songs also fit in well with mainstream pop radio stations that play her songs. For example, the lyrics to her song, “You Say” sound more like daily affirmations you would say to yourself using your inside voice. Except Lauren Daigle belts ’em out to the heavens with her soaring vocals. 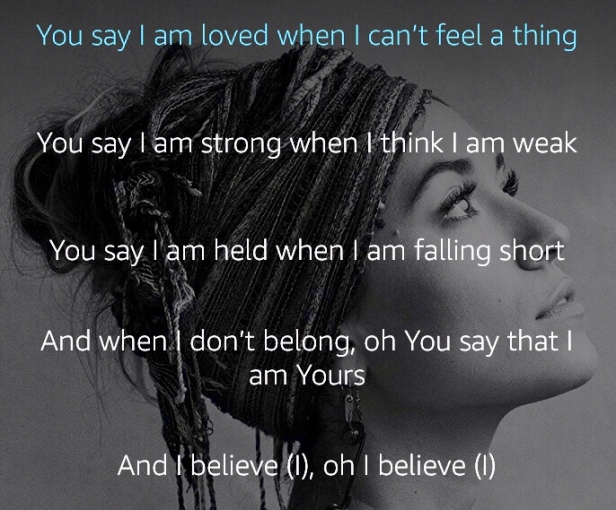 But not everyone is into her groove.

Devout Christians have questioned her Christianity, pointing out that the Louisiana-native doesn’t quote scripture or say Jesus in interviews. She has also received backlash for recent TV performances. For example, she performed on The Ellen DeGeneres Show and Christian fanatics questioned her decision to perform considering the Bible’s stance on homosexuality. Then she was criticized for being immodest by wearing a spaghetti-strap tank top when she appeared on The Tonight Show Starring Jimmy Fallon.

C’mon now, people, where is the love?

Last Friday night (February 22, 2019), over two thousand people filled the Warfield in San Francisco to shower Lauren Daigle and her eight band members with only love and much praise.

As she performed the title track from her 2015 debut studio album, “How Can It Be,” several people stood with their eyes closed, arms outstretched, and swaying while mouthing the words. They were feeling the song.

How Can It Be

Turn Your Eyes Upon Jesus/Something Beautiful:

Encore: Once and For All

So, has Lauren Daigle and her music made me want to go back to church?

I wish it were that simple. What I know for sure is that watching her rousing performance at the Warfield Theatre made me realize that my favorite part of going to church had been the joyful feeling I’d get from all the singing! Now that’s what I call good news.