On Monday, April 29, 2019, I attended a free, open-to-all Solidarity Concert for Notre-Dame de Paris that was held at Grace Cathedral in San Francisco.

Along with the City and County of San Francisco, the French consulate in San Francisco, and Grace Cathedral, Ghiberti Center for Culture organized the event following the April 15, 2019 fire that damaged the historic Parisian monument visited by 13 million people each year.

The Solidarity Concert included performances by:

San Francisco and Paris are Sister Cities. The concert couldn’t have been held in a more fitting place. Grace Cathedral in San Francisco was built in the same Gothic style as Notre-Dame Cathedral in Paris. The similarities can be seen in the Rose stained glass windows and the interior ceiling of the nave. 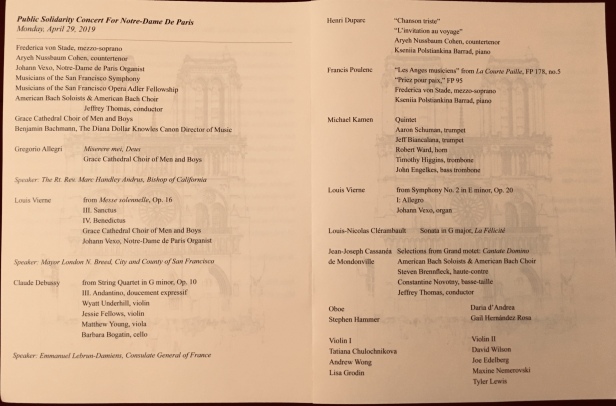 Although the concert was focused on Notre-Dame, it was touching to hear the speakers also remember recent hate crimes in places of worship, specifically the burning of black churches in Louisiana, and the shooting at a synagogue in Poway (near San Diego), California. They also paid tribute to the victims of the Easter Sunday attack on churches and hotels in Sri Lanka.