When I heard the local theatre was putting on a play set in Montmartre in Paris, my Francophile ears perked up like a nimble little bunny’s ears!

According to the playbill, Steve Martin wrote “Picasso at the Lapin Agile” in 1993, but this production would incorporate updates from his 2017 revival version.

Set in 1904, the play imagines the famous Spanish artist, Pablo Picasso and German-born theoretical physicist, Albert Einstein having a lively debate about what they think the 20th century will bring. Of course, each man thinks he will change the world with his art and science, respectively. 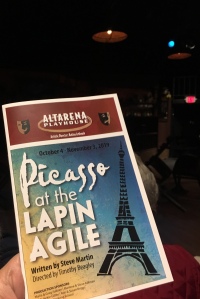 The pre-show announcer said over the PA system that the play would be performed in English and “without accents” like the French one he was affecting.

I’m not sure if Monsieur Martin wrote it that way or if creative license was used by the Altarena Playhouse in Alameda, California, a cozy theatre-in-the-round. Regardless, it worked for me – it was hilarious. 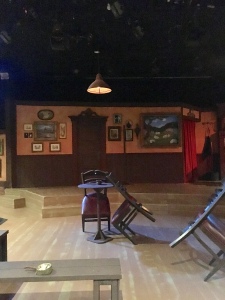 Crispian Bakery, a small-batch bakery that produces French-inspired American breads and pastries in Alameda, provided refreshments with a suggested donation of $2 per item. I got a chocolate chip cookie with coffee and my daughter opted for a ginger cookie. She said it tasted like Christmas!

As we settled in, they played Pink Martini’s song, “Sympathique,” as well as accordion music. The sweet melody helped set the mood — it made me feel like I was in Paris!

Along with the leads, Asher Krohn (Picasso) and Peter Marietta (Einstein), my favorite performances were by Jean Cary, who played three roles (Suzanne; The Countess; Female Admirer).

Without spoiling the ending, I want to mention that I didn’t particularly enjoy the part toward the end when, after brief smoke and light effects, The Visitor, appears.

It was a bit cheesy visually, but I could grasp the social commentary being made: It was suggested that The Visitor, doing something less profound, would experience greater fame than either of the geniuses, Picasso and Einstein, despite their world-changing contributions!

Without a doubt, Steve Martin is a genius himself, with comedic acting roles, like one of the obnoxious Wild & Crazy Guys from Saturday Night Live and the likable Dad in the “Father of the Bride” and “Cheaper By the Dozen” movies.

He’s also a talented dramatic actor. In the 2001 dark comedy called “Novocaine,” Steve Martin portrays a dentist who leads an ordinary life until he is seduced by a patient. It’s one of my favorite films and not only because a couple of characters in the film move to France. I promise!

Although it doesn’t hurt having a French setting, like in “Picasso at the Lapin Agile”!

Have you seen any good plays lately? Do you like Steve Martin movies and plays? Tell me in the comments below!

2 thoughts on ““Picasso at the Lapin Agile” at Altarena Playhouse”