The results of the DNA test I took recently have arrived!

Before I show my results, I want to share my list of predictions that I had written before I mailed my sample for testing: 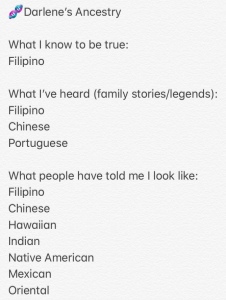 A word about ‘Oriental’

Both of my parents were born in the Philippines, but on my birth certificate, my parents’ “color or race” was listed as “Oriental”.

Although the word basically refers to something “from the East” (relative to Europe), when used to describe people, it historically had pejorative, offensive, and derogatory connotations.

Imagine that: I have a document that captures the implicit bias and subtle institutional racism that was prevalent in the 1970’s!

For me, “Oriental” wasn’t a part of my identity growing up. On the rare occasion the word would come up, I’d joke and tell people, “I’m not Oriental, rugs are!”

However, by the time my brother was born, in 1977, they stopped using “Oriental” and his birth certificate shows our parents as “Filipino.” What a difference a few years make! Although Filipino is not a color or race, this change was a sign of progress.

It was only in 2016 that a bill was signed to eliminate the term “Oriental” from federal law. The term was replaced with “Asian American”.

>> video: PBS Origin of Everything “Why Do We Say “Asian American” Not “Oriental”? (7 minutes)

In my opinion, even the term “Asian American” is too broad. On the rare occasion when I’m asked about my heritage, I say I’m Filipino. But will that change after I see the results of my DNA test?

Here are the results of my DNA test:

As I expected, my results show I’m Filipino (Filipino & Austronesian 94.4%):

It appears there was some truth to those family stories and legends about having Portuguese ancestry, after all! (Spanish & Portuguese 0.5%) That makes sense as the Philippines were under Spanish colonial rule for over 300 years (1565-1898):

I was surprised to learn that I have Bengali & Northeast Indian (0.4%) and a trace of Southern East African (0.2%) ancestry. I find these particular results fascinating, but I wonder: from which side, though? (Family’s got some ‘splainin’ to do…)

The results of my DNA test also came with predicted trait characteristics, based on my genetics, such as:

But sometimes the predictions were a little off, like the following about cheek dimples:

Now that I have ancestry results, what’s next?

While the results of my DNA test mostly confirm what I’ve known to be true, the information about me having Bengali & Northeast Indian and Southern East African ancestry has piqued my interest. I want to learn more about those regions and their respective histories, cultures, traditions, food, music, and languages.

I’m also inspired to add “take a genealogy trip” to my big book of dreams!

As I take a moment to reflect on the past, I think about my ancestors from five to eight generations ago. Beyond what they looked like, I wonder what their lives were like. Of course, I also feel immense gratitude, for without any of them, I wouldn’t be here.

At the present time, however, I have no interest in finding possible genetic relatives.

It sounds cold, but for me, I don’t yet see the value in trying to connect with genetically similar, but distant relatives, when I have blood relatives nearby with whom I don’t spend nearly enough time! Same goes for good, close friends: family isn’t always blood, as they say.

Finally, how will I identify going forward? No change: I’m Darlene, an American of Filipino ancestry. 🧬

Have you taken a DNA test or done some ancestry travel? Tell me in the comments below!

6 thoughts on “The Results of My DNA Test”

We seek justice for George Floyd and all black people around the world suffering senseless brutality at the hands of police. Black Lives Matter. Continue reading

Disclosure: If you make a purchase using the affiliate link below, I will earn a small commission at no additional cost to you.