(How do you say “baking fail” in French?)

As they say, it’s better to show than tell, non?

So allow me to show you my recent baking failure, or « échec de cuisson » !

Inspired by the lovely lemons in my little garden, I decided to make a dessert that was simple, but tasty. So when I discovered an easy recipe for French Lemon Tart, I was on it!

To save time, I used a store-bought frozen crust. (The recipe called for making your own dough from scratch.) I followed instructions on the package for thawing (15 minutes) and baking (7-9 minutes at 400°F.) 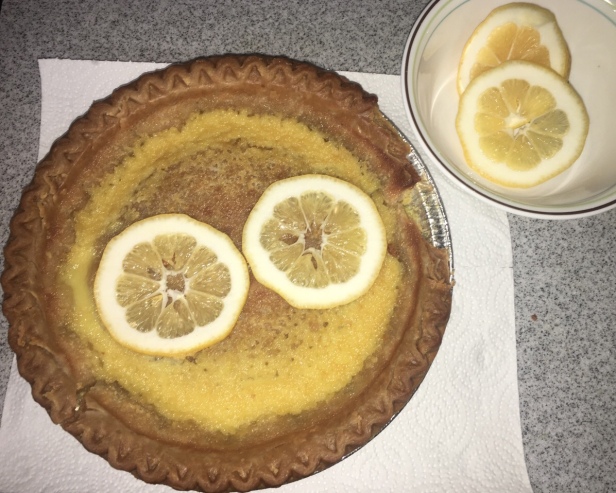 The filling had somehow seeped underneath the cracked crust causing a little bit to boil over! In addition, a piece of the crust had fallen off. Together, the spilled buttery filling and crust fragment burned on the floor of the oven creating a lot of smoke!

When I took it out of the oven, I discovered that the bottom crust had floated to the top! It left an unsightly crack in the middle of the tart.

Nothing a couple of strategically placed lemon slices couldn’t fix, I thought. But that idea only made the tart look scared. 😱

I was hopeless. But I must say, if nothing else, the dessert did have a good, fresh lemon flavor!

Next time, I will make my own crust. No, that’s a lie. I will try another kind of premade crust. I will also use less butter, like 50% less. I will put the pie pan on a cookie sheet. Just in case.

If you enjoyed this post, you may be interested in I Made an Apple Cranberry Flaugnarde with Crème Fraîche and Quiche Vosgienne (both of which turned out all right!)

2 thoughts on “I Tried to Make a French Lemon Tart”

Disclosure: It’s my pleasure to spread the word about products and shops that I sincerely enjoy – like the ones listed here! Just a heads-up: if you make a purchase using the affiliate/referral links shown here, I will earn a very small commission at no additional cost to you.

Glossier is an American skincare company committed to creating cruelty-free products that reflect their belief that “beauty should be fun, easy, imperfect, and personal.” Use my link and you’ll get ten percent off your first order:

Le Panier Français is an online marketplace based near Chicago (in Downers Grove, Illinois). They have a passion for traditional French food and strive to provide quality products at budget prices. Use my link and you’ll get ten percent off your order: